Posted on August 4, 2020 by bamissfo_adams
A man has been arrested by the police after a woman sleeping in his shop was found dead. 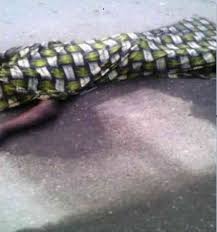 File photo
Police offficers from Ikot Abasi division of Akwa Ibom State on Saturday arrested and detained a trader, Amechi Nnamuchi, after the remains of a 65-year-old woman were found in his shop.
According to Punch, Nnamuchi, a fast food dealer from Enugu State, is resident in Ikot Abasi, where he does his business.
A family member of the suspect speaking in Uyo on Monday, said that the deceased and several other traders had approached Nnamuchi for permission to sleep in his shop.
However, trouble started when the sexagenarian slept and did not wake up.
Nnamuchi, who had gone to report at the police station, was thereafter detained.
His relation, who did not want to be identified, lamented that although the deceased’s family said they were not interested in the case, the police insisted on collecting N200,000 for bail.
He said, “Some women from Abia usually come to trade in Ikot Abasi. However, on many occasions they close late and cannot return to their houses.
“So, some of them approached my cousin and asked to be sleeping in his shop after their work at night and he agreed.
“When they came last week as usual, after trade, they retired to his shop so that the following morning they could resume their journey home.
“Unfortunately, one of them, an old woman of about 65 years, died. Her colleague told us that when she woke up around 4am as their routine and called her to wake up so that they could prepare and clean the shop before my cousin returned, she discovered that the woman was already dead.

“When Amechi (Nnamuchi) discovered what happened, he went to the Ikot Abasi Police Station to report. Regrettable on Saturday, he returned to the station and was detained.
“The police are demanding that he pay N200,000 for bail. Meanwhile, the relations of the deceased have told the police that they don’t want any problem, as my cousin was only a helper.
“The relations of the deceased have returned to Aba, Abia State, after settling with the police. Investigation on the body has been conducted to know whether she died of poison or COVID-19, but it all turned out negative.”
The state Police Public Relations Officer, Nnudam Fredrick, said the deceased’s family had no say in the matter.
“It’s a case of homicide, which cannot be handled by any police division, whether the family wants the case or not. It has to come to the state for proper investigation,” he said.