“I Like Your Straight, Smiling And Moaning Face” – Don Jazzy Reacts After It Was Reported That Erica Had S3x With Kiddwaya

Posted on August 3, 2020 by bamissfo_adams
Nigerian producer, Don Jazzy has reacted after BBNaija housemates, Erica and Kiddwaya allegedly had s3x in the house. 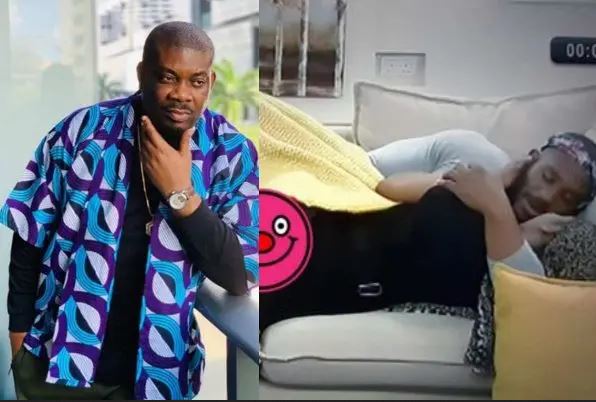 Popular Nigerian record producer, and Mavin boss,Don Jazzy, has reacted to the scene where Erica and Kiddwaya were captured, apparently having s3x.

The lovemaking scene has stirred reactions from fans who took to their Twitter page expressing disappointment at Erica for losing her self control on national TV.

As the argument continued among fans on the social media platform, Michael Collins Ajereh, better known as Don Jazzy, shared a picture of Erica, writing that he loves her straight face, smiling face and moaning face.

“I like both your straight face, smiling face and moaning face sef.”

Some fans of the reality TV show although argued that there might be no form of penetration as there is every possibility the man was only touching her erogenous spots with his hands.

See Some Reactions Below;

@Etebofranklin: She is matured to do what she want and what’s this unnecessary noise from Neighbors.. Elites are strongest fanbase but they don’t know what’s going.. Elites are good

@Bkally1: “She’s the most dangerous … because her smile keeps depicting innocence but in the real sense shes all shades”.

@JimohO “Erica does not think at all, if a man truly loves you he will not even think of doing this to you in that house.”

@Lulu33_Zs “Erica and Kidd are both adults and what they did was with consent no one should come drag them , we here for it.”

@Wavefro ”So they made out, what’s the big deal? You all haven’t made out before ? what’s with all the hypocrisy.”