Posted on August 1, 2020 by bamissfo_adams
Victor Osimhen has become the most expensive African footballer ever after his move from Lille to Napoli. 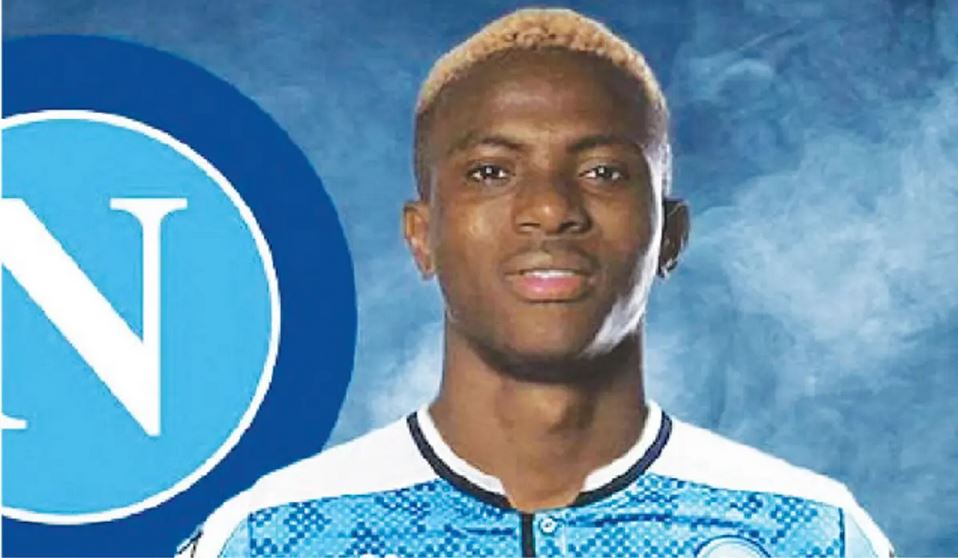 Nigerian striker Osimhen’s humble beginnings from Olusosun, the Lagos area famed for its dumpsite, to the ambience of one of Europe’s oldest cities, Naples, famed for its wealth of historical monuments, is truly one of football’s Cinderella tales, reports ’TOSIN OLUWALOWO

On Friday, Napoli officially announced the signing of Nigerian striker Victor Osimhen from Ligue 1 side Lille on a five-year deal worth €81 plus add-ons.

Aside the mega-money move making Osimhen the most expensive African footballer ever, the forward, according to close sources, will earn a whopping N4.5m annually – the highest ever by a Nigerian footballer — as salary at the Italian giants.

The 21-year-old, now regarded as one of the hottest youngsters in global football — after a phenomenal rise in two seasons at modest Belgian side Charleroi and Lille — never had the best of beginnings while growing up.

Living in one of the many makeshift houses around the Olusosun dumpsite in Lagos, Osimhen and his family had a hellish time trying to cope with the environmental and health hazards posed by the dumpsite, noted for its emission of thick smokes, foul smell and routine fire outbreaks.

The 100-acre Olusosun landfill, which receives up to 10,000 tons of rubbish each day, is regarded as one of the largest dumpsites in the world. And it’s also a hideout for criminals, who hide dangerous weapons and hard drugs inside the massive dumpsite.

Living under these terrible conditions posed enough headache for the footballer’s family, but at just six, Osimhen, last child among seven siblings, lost his mother, while his father lost his job, leaving him and his siblings in the dark world of uncertainty.

Insecurity, poverty and the perennial fear of eviction by the Lagos State Government stared his family in the face.

The setback, however, didn’t deter the teenager, who made lemonade from the lemons life threw at him: he opted to hawk water, popularly known as ‘pure water,’ on the streets of Lagos.

“I come from a place where so many dreams have died but I’m the kind of person who doesn’t give up irrespective of my situation. So, I was forced to go out and get myself a life,” Osimhen said.

“In Lagos, they sell water (bottle or sachet) which is the easiest, but the hardest because you have to run and give somebody the water and collect money.”

Running on the ever-busy Lagos roads chasing passengers was the perfect training for Osimhen, who turns 22 in December, on the way to stardom. And he combined this with street football.

But while hawking put food on the family’s table, street football didn’t, then.

The skinny up-and-coming footballer eventually caught the attention of the country’s U-17 coaches and scouts, who selected him for the 2015 U-17 World Cup in Chile, but not without a story.

“When we got to the FIFA Goal Project pitch in Abuja (where the U-17 officials were screening players), there was a huge crowd, it was like two million players. I thought, ‘how can this man (coach Emmanuel Amuneke) see me when some players had been there for several days?’

“The screening was just for 15 minutes. Amuneke said if you’re talented, you don’t need one hour to show it. ‘In 10 minutes, if you show what you’ve got, you can be in the team,’ he said. And I said, ‘no problem, let’s go.’ In a spate of 15 minutes, I scored two goals. But the coach was so tired and said, ‘just go.’ He chased everyone out. I told the person who brought me, ‘I came to Abuja to do my bit but I wasn’t picked, I think we should go back to Lagos.’

“But the team doctor told Amuneke, ‘I think you should try the guy on green.’ That’s me they didn’t know my name. When he (Amuneke) called me, he said, ‘don’t you eat, why are you like this?’

“He told me to sit down and I was happy. Then I played against the main team in camp and I was fighting really hard, giving them problems.

“After screening, the coach told some players to go but asked me to come back the following day. And he fell in love with me. The final day I was picked, the U-15 players at the Goal Project were very happy for me.”

Osimhen would go on to lead the Golden Eaglets to a record fifth U-17 World Cup triumph, scoring 10 goals, the highest ever at the tournament, and scooping the Golden Boot and Silver Ball in the process.

He was also named CAF Youth Player of The Year for 2015.

That attention-grabbing achievement sold the rising star to the world and German side Wolfsburg grabbed him.

However, street hawking also counted for something in his burgeoning career.

His pace and strength, qualities you must possess in the highly competitive Lagos hawking business, gives opposing defenders nightmarish moments.

“It wasn’t easy, but I had to do it and that set my path in which I will never give up in life no matter the situation or where I am and that gave me the zeal and momentum no matter what life throws at me,” Osimhen said.

He added, “Growing up in a family when it was hard to get three square meals in a day, I can say that I have seen it all in life; the hardest part was when I was at Wolfsburg. It was really a tough period for me and at some point, I started doubting my abilities.

“I had thought that everything was going to be smooth after my days with the Golden Eaglets but I thank God for the experience I went through at Wolfsburg and it made me realise that life is not that easy as it seems.”

After his Wolfsburg experience, where he was plagued by a series of injuries, making just 12 Bundesliga appearances and scoring no goal, Osimhen’s career seemed set for a decline after Belgian clubs Zulte Waregem and Club Brugge, who had shown interest in the striker, both turned him down under inexplicable circumstances.

But an amazing career revival at Belgian side Sporting Charleroi, where he scored 20 goals in 36 games in the penultimate season, soon set him on the path to the top.

Last summer, the Nigerian joined Lille for €12m and scored 18 goals with six assists in 38 games across all competitions. He was voted the club’s Player of The Year and also scooped the Marc-Vivien Foe prize for the best African player in Ligue 1, before Italian giants Napoli grabbed him from the French club on Friday, after protracted talks, following the player’s change of agents.

He will wear the respected No.9 jersey at the two-time Italian champions next season.

“The young man has been enchanted by Partenope. He will wear the No.9 jersey.

“(Gennaro) Gattuso (Napoli manager) really wanted to sign Osimhen. (Director of sport Cristiano) Giuntoli did a great job because the lad changed his agents during the negotiations.

“Lille will receive circa €80m, while the player over the years will get between €4m and €4.5m per season.”

“We don’t have to expect everything and immediately, even if he doesn’t score 25 or 30 goals, but he should express himself well in this extraordinary team and also make the other Azzurri score.”

The player himself is hoping to deliver the goods in the highly technical and demanding Serie A as he charts a new career course as Africa’s most expensive footballer ever.

“The next chapter @Napoli is a very exciting one and I can’t wait to get on the pitch with the team. I want to thank the fans for the past few weeks. I will definitely give my all on the pitch for the common good of the club,” Osimhen tweeted on Friday.

Playing alongside experienced professionals like captain Lorenzo Insigne, José Callejón, Fernando Llorente, Hirving Lozano, Dries Mertens, David Ospina, Kalidou Koulibaly and Arkadiusz Milik will surely come handy in helping Osimhen develop into one of football’s best strikers, as he hopes to leave the dreaded Serie A defenders in his wake, on a regular basis.