Posted on August 1, 2020 by bamissfo_adams
Around 6.30pm that day, Adisa was engrossed in a chat with his two friends when the loud explosion suddenly brought their discussion to an abrupt end. 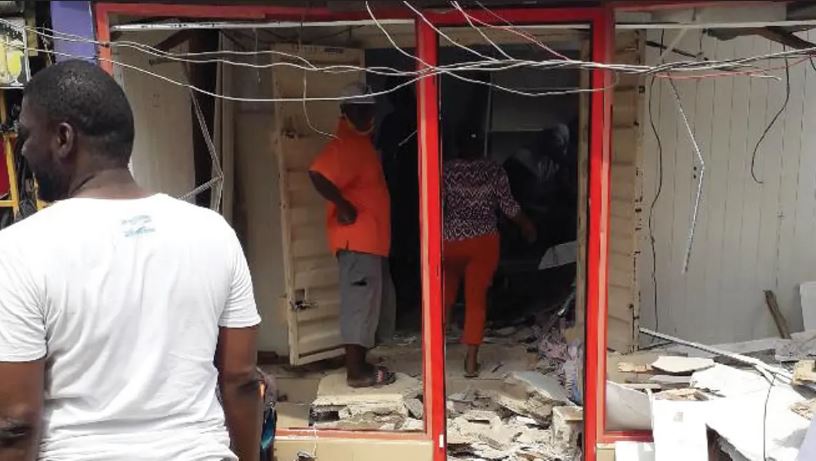 His escape from a deadly gas explosion that killed four persons on Innua Muhammed Street, in the Ajao Estate area of Lagos State on Tuesday still remains incredible to him. Trapped in his shop by the impact of the explosion from the gas station located behind his clothing store, Opeyemi Adisa barely thought he would have another shot at life. He was lucky. He escaped death with some scratches on his left hand.

Around 6.30pm that day, Adisa was engrossed in a chat with his two friends when the loud explosion suddenly brought their discussion to an abrupt end.

By the time the dust settled, remains of the owner of the retail gas outlet, Titilayo Adeyanju, her daughter, Funke, their customer, one Alfa, and a tailor at the next shop identified simply as Victor, were gory sights at the scene.

Titilayo had reportedly closed for the day when Alfa, a welder, came to buy gas at her shop. She was said to have initially refused to attend to Alfa, but after much persuasion, she changed her mind and instructed Funke to attend to him.

However, as Funke attempted to transfer gas from one of the giant cylinders into a small one brought by the welder, an explosion rocked the shop and blew up Titilayo, Funke and Alfa. Victor, whose waist was reportedly severed, died shortly after he was rushed to a nearby private hospital.

But Adisa, his friends and salesgirl were lucky, even though his boutique was also located beside the gas shop. “I thank God for preserving my life,” he said, beaming with an unexplainable excitement.

He was at the scene of the incident around 11am on Thursday to salvage some items such as wardrobes and few clothes spared by the explosion. “I cannot thank him enough,” he submitted, as he began to share the horrific incident with our correspondent.

He stated, “The experience is something I don’t want to remember. I was discussing in the shop with two of my friends. Around 6.40pm, I heard a loud explosion that I had never heard in my life. The explosion was so devastating that everything came down on my head.

“For several minutes, I was inside the rubble not sure whether I was dead or alive. I couldn’t say if I was still on earth. Everywhere was dark. I later managed to get out and there were shattered glasses everywhere. I was covered with ashes from head to toe. I started hearing ‘help, help’ from people.”

Adisa told City Round that he did not know the enormity of the damage caused by the explosion until when he saw dead bodies around him.

“When I finally regained full consciousness, I was shocked by the rate of the devastating damage. I saw body parts and blood all around. Since then, I have not been myself.

“My salesgirl escaped with a deep cut on her head. One of my friends had a cut on his palm while the other had some scratches like mine. We just managed to get out,” he added.

Despite losing goods worth millions of naira to the inferno, Adisa was consoled by the narrow escape from death. The explosion and its ruins are horrible tales he would like to forget in a hurry.

He added that there was carbide at the gas station which probably aided the explosion.

The survivor stated, “I didn’t wish it for anybody. I am happy I survived. I just stocked my shop with some new clothes from the United Kingdom but the loss is not the problem. It was like a war. You cannot save anybody. I was disoriented.

“I learnt Victor had been taken to the East where he hailed from for burial. He was about 35 years old. He is survived by three kids and a wife. The owner of the gas shop and her daughter didn’t live here. I learnt they came from Ifako area.”