Posted on July 31, 2020 by bamissfo_adams
A tragic fight has seen WWE legend, Rey Mysterio losing his sight during a match. 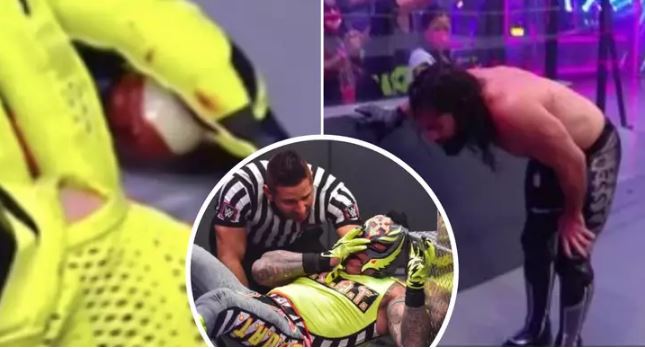 Rey Mysterio’s eyes pops out during fight
WWE legend Rey Mysterio has been rushed to a hospital after he had an eye removed at the hands of Seth Rollins during  ‘Monday Night Messiah’ fight.
However, some people have condemned the show saying the move was acted.
Rollins was seen afterwards vomiting at ringside following the graphic incident.
According to SportBible, Mysterio lost to Rollins in the first ever ‘Eye for an Eye’ match, with the rules stating the contest could only end if one man’s eye was extracted.
Rollins achieved victory when he viciously jammed the luchador’s eye into the corner of the ring steps.
‘The Master of the 619’ then rolled around in pain while clutching his ‘eye’ in his hands.
Doctors and Rey’s son Dominik rushed to ringside as Rollins grimaced in horror at what he’d done, before being sick.
WWE claimed that Mysterio was rushed to hospital and was set to be treated for a potential globe luxation.
It read: “Medical experts were optimistic that if the optic nerve is not severed and there is not too much strain on the blood vessels and nerves that connect the eye to the rest of the head, there’s a chance Mysterio can maintain his vision.”
Many had hoped the match would be ‘cinematic’, with the Boneyard and Firefly Funhouse matches standing out in the empty arena era.
However, the spot resulted in minimal blood and a prop eye was used to sell the injury.
Fans have reacted to the segment at ‘The Horror Show’ and they think it could be one of the weirdest things the promotion has ever done.
It’s believed that Mysterio has been working with WWE without a contract for the last few months.
The three-time world champion rejoined WWE in 2018 after a three year spell away from the company.
He has gone on to win the United States Championship twice and faced Brock Lesnar for the WWE Championship at Survivor Series 2019.