Shocker! Gunmen Go Wild, Massacre 13 Members Of The Same Family, One Other In Kogi

The killings were reportedly carried out in the early hours of Wednesday in Agbudu community. 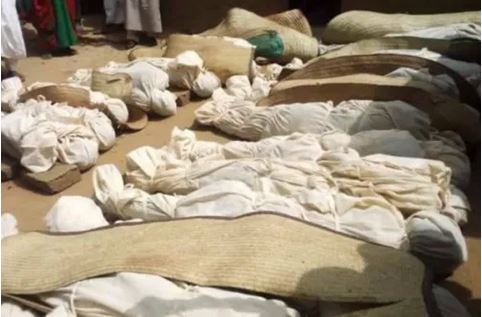 PM News reports that unidentified gunmen have killed 13 members of the same family in a village in Kogi-Koton-Karfe LGA in Kogi state.

There was only one survivor in the family, police said.

The killings were carried out in the early hours of Wednesday in Agbudu community.

One other person, outside the family, was killed and six persons were seriously injured.

The state Police Commissioner, Ede Ayuba, who disclosed this while briefing newsmen at the command headquarters in Lokoja, said he got the report about 2: 00 a.m.

Ayuba confirmed 13 of the slain victims were from same family.

“This morning around 2 am, my Area Commander called me to report that he received information that there was an attack on Agbudu community.

“I called the SSA on Security of the Local Government in Koton-Karfe and I said that before I get there, he should mobilise his vigilante men to assist the police – the DPO and the Area Commander in the area – for them to assess the place and see what assistance they could render.”

Ayuba said that the vigilance men and his men left immediately and by the time they got there, the hoodlums had carried out their operation and left.

The commissioner said he later went to the scene of crime and took part in collection of the dead bodies, adding that: “I was there and I was part of those who picked some of the dead bodies we are talking about.”

“Yes, 14 people were killed and about six others were injured. The saddening thing is that out of the 14 bodies that were brought out, 13 were from one family.

“In that family, it is only one person that survived. His uncle, his mother, his uncle’s wife, his younger brother, his senior brother’s wife, his wife and all his children were killed,” he said.

The commissioner said that the police had carried out some preliminary investigations and discovered that there had been long-standing communal feud in the community.

“What I think is, there has been a long-standing communal problem around that area which we are not clearly seeing, but we know that it would not be far from it.

“Presently investigation is in progress. The only person that survived the attack is already with us and he is helping us. The chief of that place is also helping us and some other spirited individuals.

“The Ohimege of Koton-Karfe, Alhaji Abdulrazaq Isa-Koto, is also helping us, the local government and all the personnel are helping us.

“We are sure, God helping us, we are going to get to the root of all these things that are happening.

“In the interim, I want to give the assurance that we are not going to relent in our efforts. We will make sure we get to the root of anything that is behind the killings,” he said.