Posted on July 29, 2020 by bamissfo_adams
A video has surfaced showing a rather proud Regina Daniels assaulting an older domestic staff. 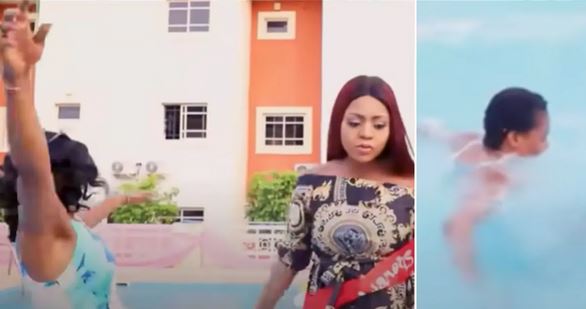 Regina Daniels pushes domestic staff inside water
Nollywood actress Regina Daniels has been caught on tape losing her temper and forcefully pushing an older domestic staff inside the swimming pool for arguing with her.
She has however, apologized.
However, Nigerians have called her too proud and full of herself for pushing someone who was trying to explain an incident to her into the swimming pool.
A few days ago, the new mum shared another video on her YouTube channel and it detailed her baby shower ceremony which was hosted by her close friends and family.
In the video, the new mum was seen preparing for the event, although, she didn’t know what it was about.
While a makeup artiste was seen beautifying her face, a staff called Sandra approached her and asked her what colour of hair wig she would like to wear. Sandra held up a blonde and wine coloured hair wig for the actress to choose from.
The entertainer said she would be wearing the wine hair wig but Sandra noted that the blonde hair would fit her better especially because of the outfit she would be wearing.
Regina insisted she was wearing the wine hair and then asked Sandra why she was arguing with her. She then angrily pushed away the makeup artiste’s hand from her face.
A new scene soon came up and it showed the actress, Sandra and another actor discussing something beside the swimming pool. It seems the actor had advised Sandra to do something but she did it the other way around. According to her, she felt it would be better that way.
Telling her that she argued too much, Regina pushed her out of her way into the swimming pool.
The actress later said that it was her pregnancy hormones. According to her, she does not like it when things don’t go her own way.
Watch the video below. Start watching from 14:30: