Posted on July 29, 2020 by bamissfo_adams
A former Abia state governor has been blocked by his supporters who insisted that he must declare for presidency come 2023. 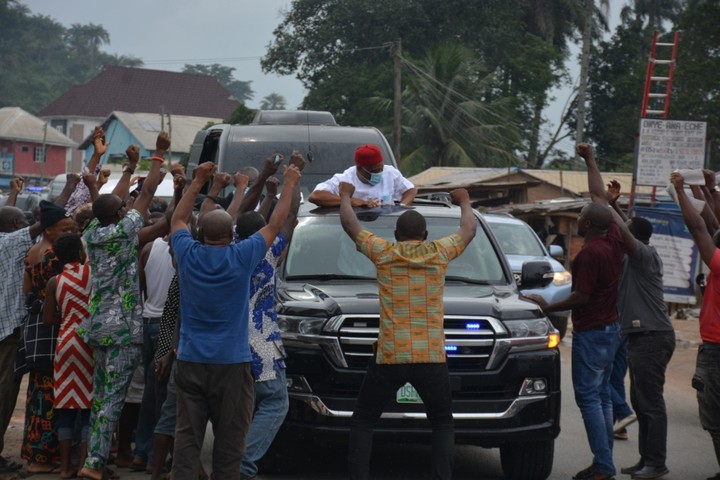 Orji Kalu and his supporters
There was mild drama at the Sam Mbakwe Airport, Owerri as the Chief Whip of the Senate, Orji Uzor Kalu was stopped by his supporters who insisted he must declare his readiness to run for President in 2023 before leaving the airport.
The incident happened as Kalu returned home since his release from Kuje prison.
Senator Orji Uzor Kalu arrived the Domestic Wing of the Sam Mbakwe Airport, Owerri at exactly, 1:32 pm via a private jet and was making his way out of the arrival when he was accosted by thousands of supporters. The visibly elated crowd made it nearly impossible for the former Governor to access his vehicle as they insisted he must declare his interest before they allow him leave.
The Senator, however waved at his supporters and asked them to in his words “Only thank God for me” before he was whisked into a waiting vehicle.
The office of the Chief Whip of the Senate had earlier issued a directive appealing to well-wishers and supporters to respect the COVID-19 regulations and avoid gatherings to celebrate his homecoming, a directive which they clearly were not ready to adhere to.
The drama continued as his convoy arrived Abia state as thousands of his supporters defied the rain to welcome him.
Shouts of “OUK our President” rent the air while his convoy made its way through the streets.
Meanwhile, All Progressives Congress (APC) Abia state chapter, in a statement signed by the publicity secretary Comrade Benedict Godson has welcomed the former Governor to the state.
The statement reads as follows “Today, our leader makes a triumphant entry into Abia, as a journey towards reclaiming our state begins In our part of the world. Today, after the much-failed efforts made to curse a man whom God has already blessed, that man is coming in to take his rightful place as our leader. He’s the APC leader in the South East of Nigeria, he’s Abia State political leader no matter the party you belong and he’s the man whom everybody gives the respect as Abia Original leader.
In Another statement released by the Movement for the Emancipation of Igbo People and signed by its National Coordinator Kelechi Okoye, the organization declared that “For those who sent Senator Orji Uzor Kalu to jail because of 2023, we shall use the same man to teach them a lesson about the resilience of the Igbo man.
We shall make sure he declares and runs for President come 2023 and we shall put them to eternal shame. In the coming months the whole nation will hear the voice of the Igbo people and it will be loud, clear and deafening”
The Senator is yet to make a statement to confirm or deny if he he will be joining the Presidential race in 2023, insisting he is still having a sober reflection on the events of the past months.
Watch video below: