‘My Story Should Give Poor Nigerians Hope’ – Hushpuppi

Nigerian alleged international scammer, Hushpuppi has maintained that his story will give hope to poor Nigerians. 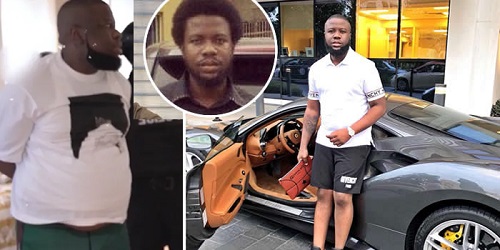 Hushpuppi
Suspected Nigerian internet fraudster, Ramon Abbas, popularly known as Hushpuppi, has asked poor Nigerians to be optimistic of change and take solace from his story.
He said his story should give hope to people who are suffering because of widespread hunger and poverty in Nigeria.
Hushpuppi made the latest statement in a video which surfaced on social media, after he was arrested recently in Dubai and extradited to the U.S to face criminal charges for allegedly using the Internet to steal millions of dollars from people and institutions around the world.
The 37-year-old Nigerian who was resident in Dubai was known for living an extravagant lifestyle and flaunting it on social media.
“Una suppose use my story do documentary to give people hope,” Mr Abbas said in the video.
“But una feel say people no deserve hope, na suffer they must dey use to. Una believe say na wetin I deserve na to suffer.”
Mr Abbas spoke in Pidgin English in the five-minute video.
He said many Nigerians were living under the crushing effect of poverty because of bad government in the country.
He said his mum hails from Nigeria’s Niger Delta region, but that she has never benefited from the huge money made from the oil exploitation in the region.
“What about people in Badagry, people in Agege, enjoyment reach their side?
“What about people wey dey Ebonyi state? Not for once I don watch news, I don hear say one development don reach Ebonyi. All those places dem no be Nigerians, dem no deserve enjoyment?”
It is clear he recorded the video before his arrest as a response to Nigerians on social media who were questioning his source of money and also criticising his flamboyant lifestyle.
He said Nigerians were coming after him on social media because of the “meat” he was “eating” abroad.
“Una come look say meat wey I dey chop for abroad na him dey affect Nigeria, na him make Nigeria no good, I no deserve to chop meat, I no deserve to wear better clothes, I no even deserve to look like human being.”
He said he was making money as “a social media influencer” from countries that were paying him heavily to “host parties, (and) events”.
Mr Abbas in the video talked about his personal struggle with poverty, how he got hit by a commercial motorcycle and how he lost his younger sister and a step-mother because of poverty and illness.
“I no enjoy one single enjoyment from government, my papa no enjoy one enjoyment. For my own generation, I am the only one that has escaped from poverty,” he said.
He said President Muhammadu Buhari owes his father explanation on why there was so much poverty in Nigeria.
In a separate video, Mr Abbas is seen chatting over a meal with a group of persons, where they were boasting about the enormous money he had.
The people in the video looked like his close friends, from their interactions.
“Hushpuppi’s driver is paid N700,000 a month,” one of the persons on the meal table said. “People that are abusing him, you are working house boy job, they are paying you N35,000.”
Mr Abbas cut into the chat to confirm what the fellow had just said, adding that his driver earned more than a “commissioner” in Nigeria and that his cleaner earned N250,000.
They all laughed over it.
One of them mocked Mr Abbas’ critics, saying they would have done better by begging ‘Hushpuppi’ to employ their fathers as his driver.
Mr Abbas is seen in yet another video shot inside Dubai airport, where he was enthusing about the beauty of the airport and the “enjoyment” that comes with money.
Next, he filmed himself on a ride inside a Rolls-Royce headed towards the airport where a private jet was waiting to fly him to Paris.
“Thank you, Jesus!” He said inside the luxury car. Meanwhile, another Rolls-Royce was carrying his luggage to the plane.
“This life is too good to be real,” he screamed with childish excitement. “Paris, I am coming in a private jet. Paris, stand up, for the real one is coming through.”
He ate assorted fruits inside the flight and read Forbes magazine.
The video ended with Mr Abbas arriving at Paris–Le Bourget Airport and checking into a 5-star hotel, Four Seasons Hotels, Paris.
In a criminal complaint filed against him, the American authorities said Mr Abbas financed his opulent lifestyle through money he made from Internet scams and that he belonged to an international criminal network which almost scammed an English Premier League soccer club of about $124 million.