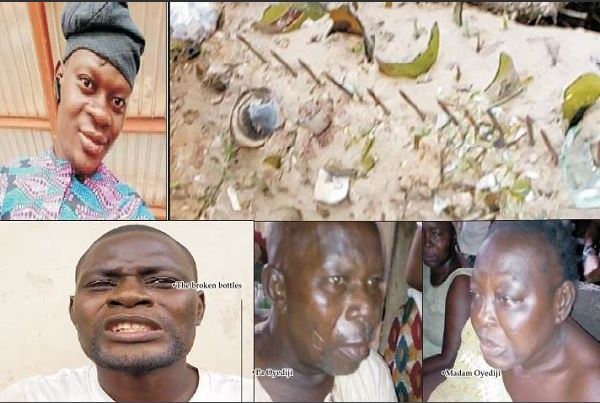 The tragic death of a youth in the Sango area of Ado-Odo/Ota Local Government Area of Ogun State has sparked protests by residents who are demanding justice.Funmilayo Oyediji’s death was said to have been caused by some sharp objects planted by an unnamed policeman in Oju Odo part of Iloye in Sango-Ota.

The incident, according to sources, occurred the penultimate week.

It was said that the 26-year-old man was on a visit to his parents on Oyalowo Street in Iloye area when he died after falling on improvised security metal and broken bottles allegedly erected by the unnamed policeman who has since bolted.

Angry residents, especially youths in the community have since vowed not to let go of the matter until justice is done.

Oyediji’s chest was said to have been pierced by the improvised objects leading to his death at a nearby hospital.

It was said that the incident happened at nightfall, while the policeman that planted the sharp objects was unfeeling.

Oyediji was said to have left his parents’ residence to charge his mobile phone following a power outage when he slipped and fell on the objects erected by the policeman on an uncovered concrete drainage.

A witness simply identified as Mrs Ojelabi said she was returning home when she ran into the deceased shortly before the incident.

She said: “I was going out to buy some things in the neighbourhood when I ran into the deceased near the spot where he fell on the erected metals and broken bottles at about 7 pm.

“Being the happy-go-lucky fellow he was known for, he exchanged banter with me and tried to crack some jokes but I was rushing home then. By the time I looked back, he had slipped and fallen on the sharp objects and had his chest pierced.

“But rather than sympathise with him, the policeman who planted the sharp objects came out and rebuked the deceased for not being careful. He was rushed to a nearby hospital by sympathisers but he died.”

Oyediji’s elder brother, Abiola, blamed the death of his brother on the sharp objects planted by the fleeing policeman.

He said: “I live at Oshodi. I only come around on weekends to give our aged parents their upkeep allowance.

“I was told on the phone that Funmilayo was battling with life after he fell on the sharp metal and bottles mounted near a drainage around Oju Odo area of Iloye and that his chest was pierced.

“I was told he had lost so much blood and that they needed money to treat him. I even transferred a sum of N100,000 to them for his treatment. Unfortunately, he died a few hours later.

“Sadly, I was told that the erring policeman who also visited the hospital in company with some elders of the community had bolted before my arrival at the hospital.

“The community leaders did not really show concern except one Elder Keshinro.”

He said: “The boy that died was well known to me. The community leaders in this area are also culpable because once you build a house, you have no right to extend your construction to a public drainage.”

The bereaved mother of the deceased, Mrs Kikelomo Oyediji urged the authorities concerned to ensure that justice was done in the death of her son.

She said: “My son left home on that fateful day to charge his mobile phone some streets away from our home because there was a power outage.

“He fell on the sharp metal and bottles because he was not familiar with the terrain since he was no longer living with us. The authorities should ensure the culprit is apprehended and punished.”

It was gathered that the grieving family could not report the incident to the police.

A source who spoke in confidence however explained that the case was reported at an unnamed police station by some concerned community leaders.

It was said that the incident created pandemonium as residents stormed the policeman’s residence in order to apprehend him.

The policeman, according to sources, however fled on sighting the crowd.

He was said to have been escorted several hours later by some policemen who fired sporadic shots to scare aggrieved residents.

The unnamed cop was said to have left with some of his valuables and has since not returned.

“The policeman in question disappeared after he got wind that some aggrieved residents were planning to attack his residence.

“No one knows his name because he does not really interact with anyone in this community,” a source who claimed to be one of the youth leaders in the community said.

It was said that he was later escorted by a team of policemen to move some of his belongings out of his house to an unknown destination.

“We did not know that he wanted to run away from home.

“Some policemen later escorted the policeman to move some of his personal belongings. They were firing gunshots sporadically to stop aggrieved residents from attacking the policeman fingered in the death of the young man,” said a resident who asked not to be named.

Residents told The Nation that the incident was reported to the police but nothing was done to reprimand the policeman.

It was said that some angry youths later stormed the policeman’s residence and vandalised his building after they found that he had bolted.

One of the youths in the community, identified simply as Mobolaji, said the policeman must be apprehended to answer for his complicity in Oyediji’s death.

He said: “One thing is sure: we (the youth) have made up our mind not to take this matter lightly until justice is served to pacify the soul of the boy, who was one of us.

“It is sad that the police, who ordinarily should apprehend the said policeman, are the ones shielding him and helping him to escape when residents stormed his house to apprehend him. This is absolutely the height of injustice and we won’t take it.”

Police spokesperson, Abimbola Oyeyemi, was not available for comments when our reporter called his mobile phone at press time.