Posted on July 4, 2020 by bamissfo_adams
Ondo cabinet members were made to undergo a compulsory Coronavirus test after Governor Rotimi Akeredolu was confirmed to have contracted the virus earlier in the week. 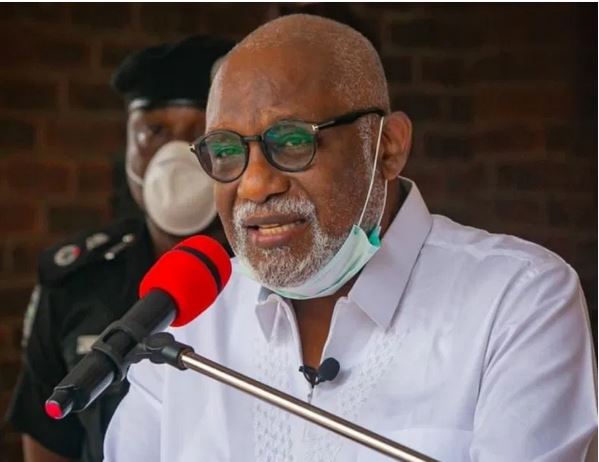 The governor of Ondo state, Akeredolu

Fear has seized Ondo State Executive Council members as they await results of their COVID-19 tests, a report by SaharaReporters has shown.

Cabinet members were made to undergo a compulsory Coronavirus test after Governor Rotimi Akeredolu was confirmed to have contracted the virus earlier in the week.

Apart from Akeredolu, his wife, Betty, some of their aides and several other government officials have all been confirmed to have the virus.

On Thursday, Commissioner for Health in the state, Wahab Adegbenro, died of Coronavirus complications after being ill for a few days.

As a result of this development, cabinet members are now living in fear especially as they all await the outcome of the test conducted on them.
SaharaReporters gathered that apart from executive council members, lawmakers in the state also undertook the test and are also awaiting the outcome.

A source in government told our correspondent that almost everyone around the governor was now in fear as they do not know what the outcome of their own test result would be.

“I can confirm to you that nobody is resting in government and everyone who has undergone the COVID-19 test is just too scared.

“Like myself, I’m scared of the result because some of us have had close contacts with the governor and some cabinet members have already contracted the virus. Everyone is in fear,” the source said.

It was gathered that no fewer than four commissioners in Ondo State were presently in self-isolation after contracting the virus.

Commissioner for Information in the state, Mr Donald Ojogo, accused the Nigeria Centre for Disease Control of leaking the COVID-19 test results of high profile individuals and state government officials to the public.