Ikpeazu, el-Rufai, Akeredolu – Check Out All The Governors Who Have Tested Positive For COVID-19

These are the seven governors who have contracted the disease in Nigeria, out of which four have recovered. 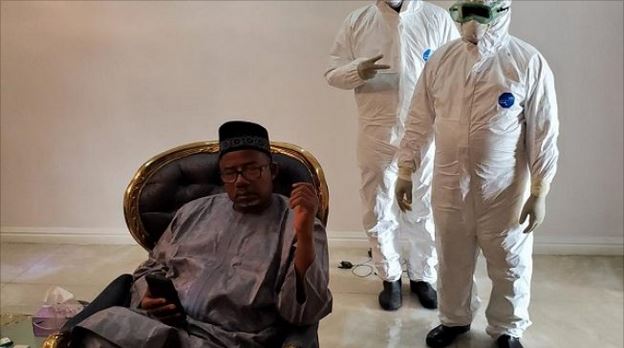 At least seven of the 36 governors in Nigeria have tested positive for coronavirus.

Confirmed cases in the country have been rising on a daily basis. According to the Nigeria Centre for Disease Control (NCDC), 27,564 COVID-19 cases had been recorded as of Friday evening.

The disease has spread across social ladders as top politicians, clerics, businessmen, medical personnel and people from all segments of the society have been infected.

Below are the seven governors who have contracted the disease in Nigeria, out of which four have recovered.

Mohammed, who presides over Bauchi, is the first Nigerian governor to test positive for COVID-19.

On March 24, Mukhtar Gidadom, his media aide, had issued a statement to announce that Mohammed was going into isolation.

The governor was said to have contracted the disease after shaking hands with a son of Atiku Abubakar, former vice-president, who also tested positive for the disease at the time. Atiku’s son had denied meeting with the governor during the period.

But in a tweet on April 9, the governor announced his recovery.

“Alhamdulillah. I just received the green light. My second test for #COVID19 returned negative. I thank you all for your prayers & support even while I was in isolation. Most importantly, all the praises & thanks be to Allah – the Most Beneficent, the Most Merciful,” the tweet read.

NASIR EL-RUFAI: Recovered after over three weeks in isolation

El-Rufai became the second governor to test positive for the virus.

In a video he uploaded on his social media account on March 28, the Kaduna governor announced that Hadiza Balarabe, his deputy, would chair the state’s coronavirus task force.

Fortunately, the governor announced that he tested negative two consecutive times after receiving treatment for close to four weeks.

“I am delighted to report today, that after nearly four weeks of observing a strict medical regime, I have now received the all-clear after two consecutive negative test results.I am grateful to all that expressed concern during my illness. Thanks,” he had said.

SEYI MAKINDE: He recovered after less than a week

On March 30, Makinde, governor of Oyo, announced that he was under isolation after testing positive for the virus.

Six days later, the governor said he had recovered from the virus.

“I am deeply moved by your prayers and support throughout this period. I am so thankful. This evening, I received my second negative test result for COVID-19. I especially thank Prof Temitope Alonge, who acted in my stead as Head of the Oyo State COVID-19 Task Force,” he tweeted.

Ikpeazu, governor of Abia state, announced that he tested positive for COVID-19 on June 8.

His failure to recover after the usual 14 days of isolation, sparked concern among his supporters.

In a statement on Saturday, John Kalu, commissioner for information, said Ikpeazu was certified free of the disease on Friday.

“Governor Ikpeazu is therefore deemed free of the virus according to the extant guidelines of NCDC and the World Health Organization (WHO).”

The governor of Delta state tested positive for COVID-19 alongside Edith, his wife, and one of their daughters.

The governor and his wife went into isolation following the confirmation of their daughter’s case.

On Tuesday, the governor of Ondo state, announced that he had contracted COVID-19. He made the announcement on his Facebook page, saying he was already in self-isolation as required by the case management guidelines of the Nigeria Centre for Disease Control (NCDC) for someone who is asymptomatic.

Despite his COVID-19 status, Akeredolu, through Donald Ojogho, his information commissioner, said he would not hand over to his deputy over political differences.

Agboola Ajayi, Ondo deputy governor, was in the news exactly two weeks ago when security operatives prevented him from leaving government house.

Dave Umahi, governor of Ebonyi state, has also tested positive for COVID-19. The governor broke the news in a statement he personally signed on Saturday.

He also disclosed that some of his aides had tested positive for the disease.

Umahi, who is the the most recent name added to the list of governors who tested positive for the virus, handed over to his deputy.