How We Scouted For Pregnant Teenagers, Made Millions Selling Their Babies – Couple Operating Baby Factory Confesses

Posted on July 4, 2020 by bamissfo_adams
Three newborns, their mothers, and three pregnant teenagers were reportedly found at the facility. 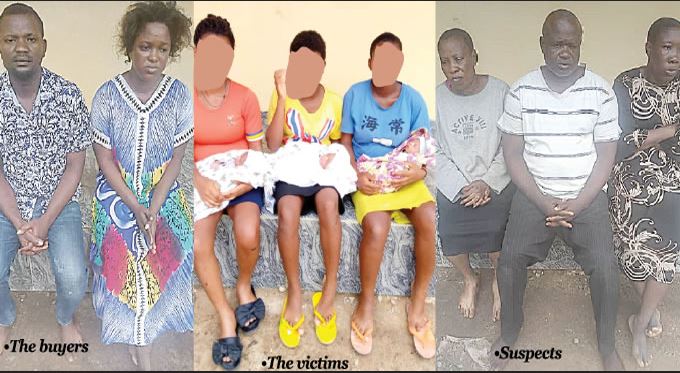 According to The PUNCH, a couple, Chidi and Maureen Martins, allegedly running a baby factory at a church in the Rumuolumili area of Port Harcourt, Rivers State, have been arrested by the police.

Three newborns, their mothers and three pregnant teenagers, were reportedly found at the facility.

Another couple ready to take away two babies bought at the church, Grate Mercy Deliverance Ministry, were also apprehended by operatives of the Inspector-General of Police Intelligence Response Team.

The operators reportedly scouted for teenagers who could not take care of their pregnancies across Rivers, Abia, Akwa Ibom and Imo states.

City Round learnt that the Martins worked with a woman identified simply as IB, who found buyers for the babies. IB is still at large.

To fast-track the criminal deal, they reportedly induced their victims to give birth at eighth month. After births, they allegedly gave them drugs that would make them sleep off.

“When they woke up, they would be told the babies were dead whereas they (the babies) had been sold to waiting buyers,” a police source said.

It was learnt that the syndicate was busted recently after a relative of one of the victims, Patience, lured into the church from Akwa Ibom State, reported her missing to the IRT.

Consequently, a team of detectives trailed Patience to the church where they found three pregnant teenagers, three newborn babies and their teenage mums, including Patience.

“Patience was found with a day-old baby boy and two other teenagers Favour and Chizaram, were found with a baby girl and a baby boy respectively. In the course of investigations, it was discovered that pregnant teenagers were usually induced into labour in their eighth months due to demands from people who wanted to buy the babies.

“The suspects, Maureen Matins, and her husband Chidi, who used the church to perpetrate the criminal act, promised the expectant teenage mums accommodation, feeding and maternity care and assured them they would be sent back after delivery. They worked with a woman known as IB who is on the run now.

“A couple, who came to buy a baby boy and a girl from Maureen, were also arrested. They paid N3.5m. The children are those of Patience and Favour. The two babies were sold to the couple as twins. There are over seven rooms in the church where the girls were kept. Maureen said she had lost count of the number of babies she had sold.”

Another source disclosed that after selling the babies, Maureen and her husband would give the mothers N30,000 to travel back to their states.

He added, “It was discovered that Maureen had been operating the baby factory for over six years and people came from across the country to buy babies from her. She usually sold baby boys for N1.5m each, while baby girls were sold for N1.1m each. Maureen is the general overseer of her church, while her husband is an associate pastor.

“We are currently tracing over 20 children which they have sold. When children are born, Maureen will ask their mothers not to breastfeed them so that they don’t get used to breast milk.”

While being paraded, Maureen, 45, said she is a nurse and only helped to take delivery of babies at the church. She stated that it was IB who scouted for the pregnant teenagers and sold the babies.

She said, “I am from Isiamba North, Imo State, but I reside in Port Harcourt.  I am married with two children and I am also a nurse. It was IB who introduced this ‘business’ to me. She was the one who brought the pregnant ladies and sold their babies.

“I don’t know where she got them from; mine was to look after them until they were delivered of their babies. IB would take the babies to the buyers and I would tell the girls that their babies are dead and give them money to return home.”

One of the victims, Favour, said she ended up in the baby factory because the man who impregnated her did not take care of her. She stated that one Precious, who offered to help her, took her to the centre, where she stayed for one month before she gave birth.

She stated, “I left secondary school in 2019. My delivery date was not due yet. I was given an injection. I was locked up in a room with some other girls for hours.  I slept off and when I woke up, they told me that my baby was dead. They didn’t feed us well. I heard that they sold my baby and one other child for N2.5m.”

In her account, Lovett said she fell victim to the syndicate after her parents and boyfriend’s relatives rejected her.

She stated, “I am from Imo State and when I got pregnant, my mother rejected me. My boyfriend took me to his relatives and they also rejected me. His friend told me that a woman would take care of me at her home and after giving birth, my boyfriend would pay and pick me up. I was taken to the woman but I didn’t suspect her. They locked us inside the house for 10 hours most days.”